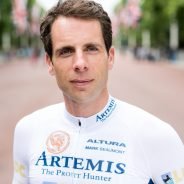 Over the coming months when so much is unknown – what we do know is that most of us will still be able to get out for a walk or onto our bike.

So to inspire us to get off the couch we are very excited to announce that our next guest speaker will be record-breaking round-the-world cyclist Mark Beaumont.

Mark who was born in the foothills of the Scottish Highlands, at just twelve years old cycled across Scotland from Dundee to Oban. A few years later, while still at school he completed the 1,000-mile solo ride across Britain from John O’Groats to Land’s End.

His next long-distance ride took him the length of Italy from Sicily to the Alps, a journey of 1,336 miles, helping to raise £50,000 for charity. After graduating from Glasgow University, he decided to devote himself full time to endurance adventurers. And in 2017, Mark made history pedalling through the Arc de Triomphe in Paris just 78 days, 14 hours and 40 minutes after setting off on a mission to cycle the globe in under 80 days.

Join us on Wednesday 28 October at 8pm to hear about Mark’s remarkable, kaleidoscopic tour of the world that redefines the limits of human endurance.

Tickets are £10 and available at Eventbrite.com